I have two books to talk about today – one that will feel very familiar to my readers & one that’s different from anything I’ve ever written! 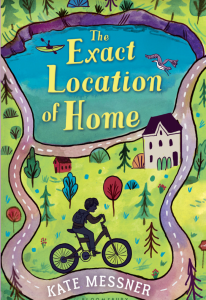 First… today is book release day for THE EXACT LOCATION OF HOME!  It’s about geocaching, absent parents, great blue herons, homelessness, and friendship. It’s also a companion novel to my 2009 debut THE BRILLIANT FALL OF GIANNA Z. This book has been a long time coming. I wrote a draft of it before Gianna Z. even came out, but at that time, Bloomsbury wanted me to wait a while on another book set in the same world. By the time GIANNA Z. won the E.B. White Read Aloud Award in 2010, I’d moved on to other projects, and it was just last year that my editor let me know that she wanted to revisit that Zig book. I revised a bunch more to get it ready for today’s hardcover publication. In some ways, this book feels like a collaboration between the writer I was nine years ago and the writer I am today, so I was thrilled when it earned two starred reviews. SLJ called it “A gentle but truthful look at poverty and homelessness for fans of realistic middle grade novels, such as Gary Schmidt’s Okay for Now and Messner’s The Brilliant Fall of Gianna Z., in which Zig is a secondary character,” and Kirkus sums it up with: “Middle school worries and social issues skillfully woven into a moving, hopeful, STEM-related tale.” (I didn’t link to the SLJ review because it’s loaded with spoilers. You can google it if you don’t mind having all your surprises ruined. 🙂

My other book news this week is a cover reveal for a project that’s totally different from anything I’ve written before. BREAKOUT is a novel-in-documents, told entirely through letters, text messages, press clippings, petitions, photographs, comics, and other bits of everyday life that soon-to-be 8th grader Nora Tucker collects for her community’s time capsule project. The project is supposed to share a slice of life in fictional Wolf Creek, a sleepy mountain town in the Adirondacks, but the day after it’s assigned, two convicted killers escape from the maximum security prison where Nora’s father is superintendent. Nora’s collected documents share many points of view on what happens during the two-week manhunt that changes the way Nora sees some of her neighbors and the place she’s always called home. BREAKOUT is a fictional story, but it was inspired by the Clinton Correctional Facility prison break two summers ago, which led to a three-week manhunt in the woods and mountains near my home in Northern NY.

BREAKOUT isn’t out until June 5th, but the one and only John Schu is hosting a cover reveal along with an interview on his blog this Thursday, so be sure to stop by if you’d like to see how the cover came to be and hear more of the story behind the story for this book!

1 Reply on “Two New Novels for the New School Year: The Exact Location of Home and Breakout!”