It’s been another amazing day at TED2012 – full of science and improvisation, nature and urban planning, robots and magic and gospel music. Two talks that really made me think yesterday have already gone live on Ted.com  – so you can watch futurists Peter Diamandis and Paul Gilding present their views, too.

Regina Dugan, the director of the Defense Advanced Research Projects Agency, gave an amazing talk today about the groundbreaking work being done by scientists and engineers on her team. Talk about a sense of wonder… You won’t want to miss this one when it goes online. 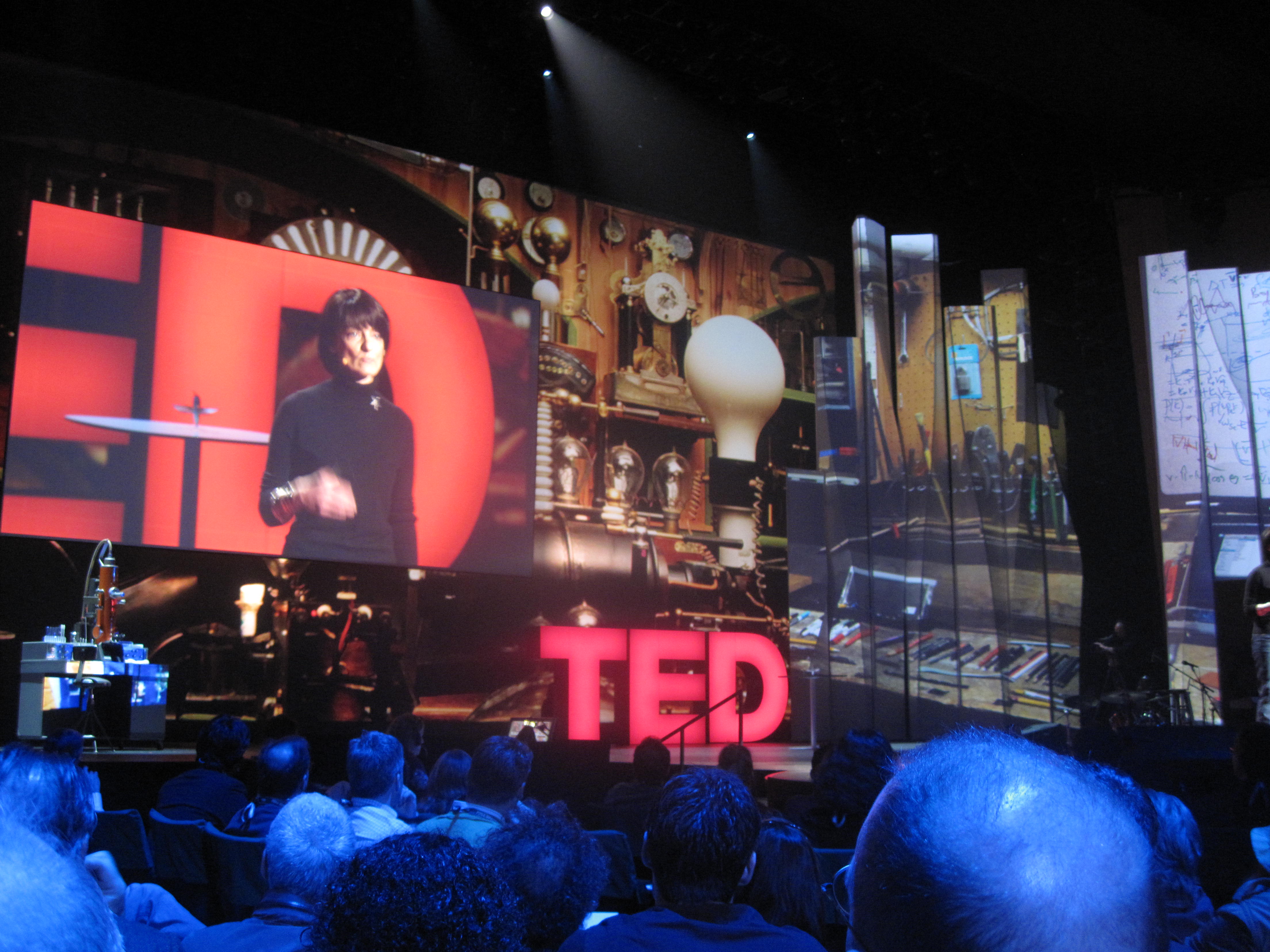 “When you remove the fear of failure, impossible things suddenly become possible.”

“Be nice to nerds. Scientists and engineers change the world.”

So true.  More quotes from today, from talks you’ll be able to see online soon:

“I’ve been from one end of the earth to the other, trying to get the perfect shot and capture animal behavior we’ve never seen before.”    ~Karen Bass, film maker

“I didn’t want my grandchildren to grow up and say, ‘Opa understood what was happening, but he didn’t make it clear.”  ~Climatologist James Hanson on why he speaks out on climate change

“Be the entrepreneur of your own life.”  ~Reid Hoffman, co-founder of LinkedIn

“A neighbor is a better and cheaper alternative to government services.”  ~Code for America’s Jennifer Palka, on the apps her code writing fellows develop to solve community issues. One lets people adopt a fire hydrant that needs shoveling after a snowstorm. You even get to name your hydrant.

The 2012 TED Prize was unveiled tonight, and it has to do with creating the city of the future. You can help… and you should. Here’s how it will work.

One last TED story from today…

During one presentation, the speaker pressed his multimedia clicker to play a video, and nothing happened. He pressed it again and got the spinning rainbow of doom.

He pressed the button again and the computer made that clunking noise it makes, when it’s frozen and you keep pressing buttons anyway.  Then he pressed it again. It thunked again. And another spinning rainbow appeared. We all thought the TED tech team would jump in any second. But they didn’t.

We all squirmed in the audience.

And then another spinning rainbow showed up with another error message. And another.  And then… 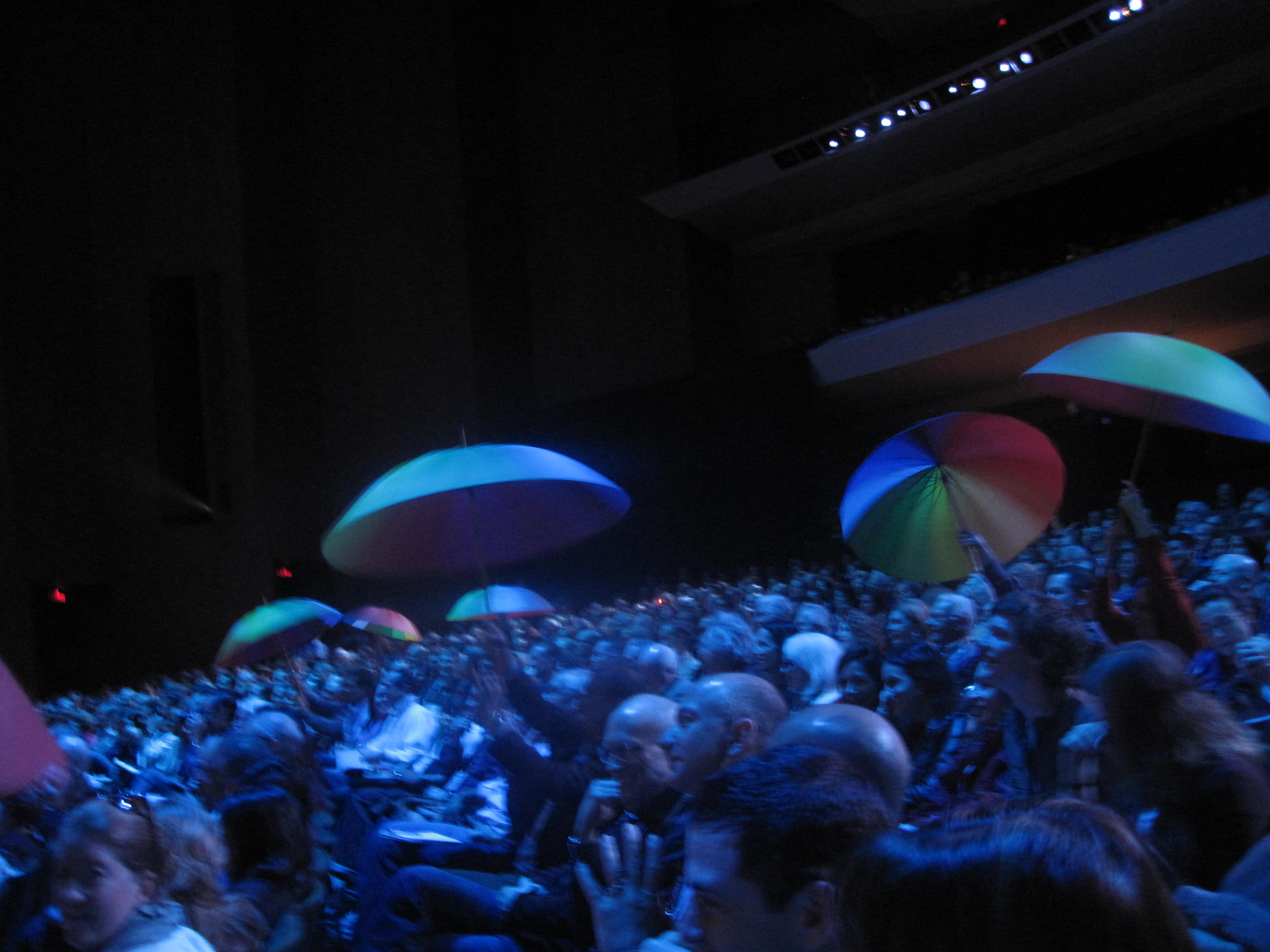 Scattered audience members opened rainbow umbrellas and began spinning them. And then people in rainbow bodysuits and with rainbow hair ran out on stage and fired rainbow streamers out of a cannon. And then the beach balls rained down from the balcony.

Have you guessed it yet?  Improv Everywhere. It was amazingly fun, and you can read more about it (and see clearer images) on the TED blog.

Tomorrow brings a new cast of speakers & performers – I’m especially looking forward to hearing from Philippe Petit, the man who walked the wire between the Twin Towers, and Jon Ronson, whose book about psychopaths I recently read, enjoyed, and then had bad dreams about.