Good morning, writers! Hope everyone had a great weekend!

Von Sanders – Congratulations! You won our Friday drawing for a copy of REAL MERMAIDS DON’T HOLD THEIR BREATH by Helene Boudreau. Please email me your mailing address (kmessner at kate messner   dot  com) so she can send your book.

For those of you who want to dive right into writing today,  Jo’s Monday Morning Warm-Up for the day is here!

And we have not one but TWO terrific Mini-Lesson Monday posts this morning. This one features guest author Anne Marie Pace with wise words on Reading to Write, so be sure to check it out.

And the one you’re reading now features guest author Alex Lidell with a character workshop!  Alex is a YA fantasy writer and author of ABNA Finalist THE CADET OF TILDOR (Penguin, 2013). Learn more at her website: http://alexlidell.com.

Today we will work on describing a character to the reader without stopping the story to give a Miss America introduction.  John entered the room.  He was a rude, grouchy school principal in his late 60s who enjoyed telling everyone about how hard his job is.  Blah.  Let’s do better than that.

Let’s see how much we can learn about a character just by what he says about something else.  If we can pull this off, not only will our character be more vivid but our writing will be tighter, since each sentence will do double duty – developing character AND moving the plot forward.

Take a look at the picture below and then read what five different characters had to say about the scene.  What can you tell about the speaker from his words? 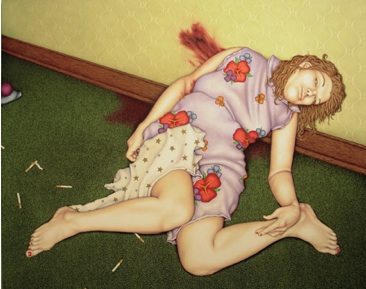 Bob: “35 year old female found deceased on third floor apartment of 123 Main St.  Body is bloody, apparently from a single stab wound to the back.  Neighbor reported hearing an argument around 3:30pm, and found the victim “dead” when he went to check on her at 4pm.”

Charles: “35 years old.  Mary Bell was only 35 year sold.  Bless her heart, but I knew something like this was coming.  Kept telling her to just forget John, to move out of the city.  But she thought she knew better.  All the young kids think they know better.”

Derek: “The lady was lying there bleeding and no one was doing anything to help!  I told dad we should bandage her up and he just yelled at me to go home.  That isn’t right.”

Eddy: “She was happy, you know.  She always wanted to die.  Everyday, she kept saying that – over and over and over.  Begging me for it.  Begging everybody for it.  And now she has what she wanted all along.  I even let her wear her favorite dress.  I wanted her to be happy.”

Note that Adam, Bob, Charles, Derek, and Eddy are all talking about the dead woman – not about themselves.  Yet, the WAY they talk about her tells us a lot about them.  Let’s look at how this happens:

Adam and Bob seem to be professionals.  There is no emotion in their voice, and they sound like they are giving a report to someone.  The sentences are chopped and sometimes grammatically incorrect – but not ignorant.  No hesitation, no repeated words, just the facts.

Although Adam and Bob are both professionals, we can tell that their profession is not the same. Adam is using medical words.  He says “cardiac arrest” and “penetrating trauma” where Bob says “deceased” and “stab wound”.  They are also both covering their basis, but in different ways – it’s important for Adam to justify that the woman is in fact dead (asystole was confirmed in two leads), where as Bob is more concerned about what may have happened before the woman died (neighbor reported hearing an argument).  Most likely, Adam is a paramedic and Bob is a police officer. Do you agree?

Charles is a bit more personal.  He’s calling the woman by name.  Still, he does not seem overly distressed.  Charles is more focused on telling us that he had been right all long, then on grieving.  Why?  Maybe because he is self centered human being who could care less about others.  Maybe he just didn’t know her that well.  What if we add just two words to his statement: “My daughter, Mary Bell…”  Wouldn’t this reaction tell you a lot about him and his relationship with his daughter?  Also, from the way he refers to a 35-year-old woman as a kid, so we can guess that Charles is older.

Derek’s indignation that no one is helping shows us his naiveté about death.  He is likely a child.

What about Eddy?  Now he’s different all together.  Unlike everyone else who was talking about the scene, Eddy is more concerned evaluating the morality of the murder.  She wanted it.  She wanted to be dead.  Note that he LET her wear a certain dress. Eddy thinks it’s his right and power to decide what other people should wear.  He is emotional, but not empathetic. He repeats words (over and over and over).  Probably someone mentally unstable, right?

Look how much we learned about each character by listening to them describe something!  Now let’s see you try it.

Describe the picture from your character’s point of view, and the rest of us will try and figure what your character is like.  Let’s see how close we get it.  You may use a character from your work in progress on invent a new one.  I recommend doing the exercise twice, from two different character’s POV, to better understand how this works.  If you have any questions, or if I missed commenting on your homework, please email me at Alex@alexlidell.com