Good morning! It’s time for a Monday  mini-lesson, but first, let’s announce the winner of Friday’s giveaway.  Congratulations, Margaret Simon!  You’ve won an audiobook of Rosanne Parry’s SECOND FIDDLE.  Please email me your mailing address (kmessner at kate messner dot com) so that Rosanne can send along your book.

Today’s featured author guest is Jo Whitmore, the author of funny middle grade books like D IS FOR DRAMA, ODD GIRL IN, and FRONT PAGE FACE-OFF. Visit Jo at her website: http://www.jowhittemore.com/

This week we’re pushing back our sleeves and getting up to our elbows in humor.

Let’s start with this statement: HUMOR IS ABOUT THE UNEXPECTED

This is true 80% of the time. The remaining 20% is humor that you know is coming but is still ridiculous enough to make you laugh (A toddler carrying a whiffle ball bat with Dad walking behind him? You just KNOW what’s going to happen)

But for the most part, we laugh at something because we didn’t expect it. It’s an interesting twist on an ordinary situation. You’re taking something familiar to the reader and letting them see it in a new light. That’s humor.

Keep that in mind throughout this lesson.

The four important things to remember about writing humor are:

The setup is the lead-in to a joke. The execution is the punchline.

THE SETUP WILL NEVER BE FUNNIER THAN THE EXECUTION.

In riddle form, setup is usually a question. “What flowers are the best kissers?”

With the execution being the answer. “Tulips.”

In novel-writing, we see setup as narration (in the form of an observation) or dialogue (in the form of banter). Oftentimes, the setup will give no sign that there’s humor ahead (remember: humor is in the unexpected) and may simply be a statement of fact.

Execution: I saw a chicken lay a hard-boiled egg.

Was that setup funny? No. Just a simple observation. It’s up to the execution to bring the fun. Setups…so lazy!

“Do you think people treat me like a baby?” I ask.

She eyes my plate. “You’re eating pre-cut steak with a spork.”

If you’re setting up a joke, the execution should follow in the next one or two sentences. Otherwise, the tie breaks down between the two.

It’s really hot outside. I know because I went for a walk, seriously craving ice cream…Rocky Road, which is my favorite. But they were out so I got Bubble Gum instead and then on the way home I saw a chicken lay a hard-boiled egg.

We lose the joke.

Just set it up and knock it down.

And don’t forget the importance of the pause at the END of a joke. It gives the reader a chance to process it and realize you are hilarious.

How do you pause in writing? By letting the characters react. That’s a sign to the reader that they should react too.

It’s not just how you say something, it’s WHAT you say. If you’ve heard the “Why did the chicken cross the road?” joke, you know there are dozens of answers, some funnier than others. Why? Because of the words chosen for the response.

You want your punchline to be unexpected but not far-fetched. You want ridiculous but not impossible. Readers will suspend disbelief for humor, but only so much.

Okay: My mom cooks the weirdest things. At least no one can say they make a better squirrel pie.

Too far: My mom cooks the weirdest things. At least no one can say they make a better unicorn pie.

Why is that too far? Because if this is a contemporary novel, unicorns don’t exist (sorry, kids). You’re making a joke about something that couldn’t possibly happen.

Also, to bring timing back up…did you notice the rhythm seemed better with the squirrel punchline? It was only one beat off from unicorn, but it flowed better.

Back to word choice.

NEVER SETTLE ON THE FIRST JOKE

You can, and usually will, make a joke better by switching out words in the punchline or going for a completely different punchline. Sometimes, you may have the perfect punchline but the setup just needs to be tweaked to meet it. That joke I wrote about the steak and the spork? I knew that’s what I wanted the punchline to be. I just had to reword the setup to lead into it.

All jokes will not work for all audiences. You have to take into account the age of your reader/gender/intelligence/pop culture awareness/etc when writing any joke. For example, if I’m writing for tween girls, I’m not going to throw in humor about the stock market because most aren’t old enough to know/care what that is. Your setup can usually work for any reader. It’s the execution that will vary. And be careful with sarcasm, especially for younger audiences that haven’t yet grasped the concept. If you MUST use sarcasm with them, make sure to include a gesture that shows the speaker isn’t serious, such as an eye roll.

And there you have the bare bones of humor.

Now go out there and make ‘em laugh!

Assignment choices for this week:

I don’t get the appeal of clowns.

This adorable picture is your setup. 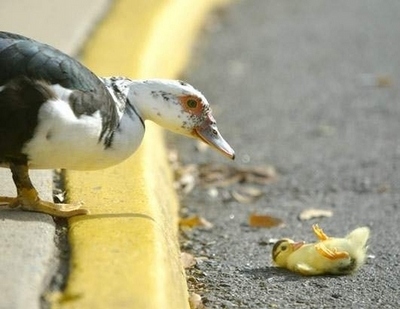 Caption it with something funny (your punchline)