Good morning, and welcome back to Teachers Write! Today, we’re going to talk about dialogue — and how to make it more interesting.

Have you ever written a scene where two characters need to have a long (and important!) conversation, but it goes on so long that it feels boring? This week’s revision tip comes from a book for screenwriters, called SAVE THE CAT, whose author Blake Snyder called it the “Pope in the Pool” technique. That name comes from a script called THE PLOT TO KILL THE POPE, and in it, the writers needed to get a bunch of important information to the reader. It was too much to just dump on the page, so instead, they had people have a conversation that included all those important details while the Pope was swimming laps in the pool. We don’t think of the Pope as a normal guy who would swim laps, so that made the scene fascinating,

In my cricket-farm mystery CHIRP, there were several scenes where characters needed to have important conversations that went on for a while. To keep those scenes interesting, I made sure the characters were in action while they were talking – baking cricket-flour cookies together, or playing on a playground while they wait for fireworks to start. And the truth is, dialogue with some action happening around it is almost always more interesting than two people standing still, talking.And you don’t always need dialogue tags in a conversation, once it’s clear who’s talking. Sometimes they can be replaced with action.

Instead of:
“Is that a mouse that just ran under the sofa?” George asked.“Looks like it,” Isabelle said.
Try:
“Is that a mouse that just ran under the sofa?” George leaped onto the easy chair. Isabel squatted down and lifted the slipcover. “Looks like it.”
Here’s an example of a conversation that could use some action. Where might you put these two characters, and what could they be doing while they talk? Maybe they’re working out at a skating rink or building a treehouse or trying to babysit for a little kid who keeps running away. Try rewriting this scene using the “Pope-in-the-pool” trick to make it more interesting!
“I’ve been thinking about last week,” said Prima.
“Yeah, me too,” said Avery.
“The thing is, she didn’t mean to tell everybody your secret,” Prima said.
“But she did,” said Avery.
“I know, but…it was complicated. You know she’s only been here three weeks, right? She couldn’t have known all that stuff about your dad or what happened with the race or — ”
“So?” Avery said. “She knew it was a secret.”

This week’s revision tip is from guest author Christina Soontornvat, whose amazing book ALL THIRTEEN, about the Thai soccer team’s cave rescue comes out this fall! 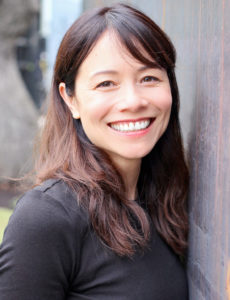 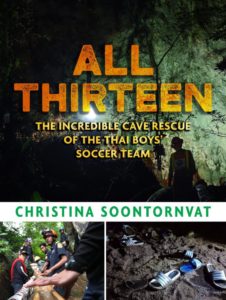 One pitfall of mine when I’m writing nonfiction is that I think every single detail is interesting. Of course I do – this is my subject matter! But I have to remember that my job as a nonfiction writer isn’t just to produce a list of facts that I find fascinating. My job is to take a subject that is very specific, sometimes obscure, and tell a true story that is universally relatable. It’s that universally relatable part that makes the story interesting and makes readers care. So I often find myself in the revision process with way more material than I am going to be able to include in the actual book!

One of the filters I use to decide what to keep and what to throw out is whether the material connects to my larger themes and whether it helps reinforce the universal relatability of the story. For example, there were 10,000 people who worked or volunteered during the Thai Cave Rescue. I could have included so much more information about the volunteer efforts than I ended up with – and the book would weigh 800 pounds! In the end, I decided to shine a spotlight on the volunteers working to control the flooding on the top of the mountain who had to carry out Herculean feats with little support and inadequate supplies. Their story tied into a larger theme in my book about resourcefulness and mental fortitude.

So as you revise, look at how each piece that you include supports the bigger picture. How do the facts work together to tell a universal human story? Are you missing something that could help connect the dots and make readers care? If so, then that’s the area where you can focus your research.

This Week’s Writing Prompt from Kate

If your work-in-progress could talk back to you, what would it say?

Read through your draft; then spend five minutes writing in response to this prompt. Have some fun, and write in the voice of your personified draft. You can make it nurturing or cranky or snooty — whatever you like! This sounds kind of silly, but it’s actually a good way to distance yourself a little from your writing in order to see it more clearly. And it’s a great prompt to use in the classroom, too. I taught middle school English for fifteen years, and my students always discovered ways to improve their writing through this one (even as they laughed about writing things like “Help! I need a thesis statement!” in the voices of their essays!)

Is it the end of July already? I can’t believe our four weeks together have gone by so quickly! I’m so, so glad that you chose to spend part of your summer writing and learning with me. I hope you’ll share some of these lessons & prompts with your students this year, along with my books. I know there’s a lot of uncertainty as we head into a new school year, but I also know that with your courage and creativity and commitment to your students, you’ll keep loving them and sharing stories and make it all work somehow. Thanks, as always, for the amazing work that you do.

Jen Vincent will be hosting one last check-in on Sunday. Enjoy your writing this week, and take some time to celebrate the work you’ve done!