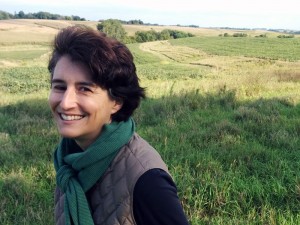 Sarah’s the author of the Magic Thief series, which has been published in 20 languages around the world, and the Winterling trilogy, which has not. Her next book, Ash & Bramble is a YA and is out in September. She does free Skype visits with classes/library groups that have read one of her books! When not writing (or Skyping) she’s wrangling goats, dogs, cats, chickens, bees, and gardens, and working to restore the native woodland habitat on the 40 acres she lives on in rural Iowa. Today, she joins us to talk about main characters…

The Protagonist Must Protag: Character and Action

As you know, protagonist is another term for the main character of your novel. But it means more than that. It comes from the ancient Greek word πρωταγωνιστής which basically means main actor.

The protagonist is one who acts. Especially in YA and MG books, the protagonists are not people who sit around passively, waiting for things to happen. Nope, they analyze and question. They’re troublemakers. They are not always nice and not always good. They are adventurous. Sometimes they’re unhappy or angry or stubborn. They are seeking something or need something or want something. They are incomplete. A protagonist is a person who has the capacity for heroism—sometimes unexpectedly. His heroism is not always loud or vigorous—some protagonists might act in more quiet, personal ways. But because the protagonist has the power to act, he often does what he thinks needs to be done.

The protagonist is often alone and forced to become her own agent in the world. By ‘agency’ I mean she has to act on her own behalf; she has nobody to act for her. That’s why, in children’s literature, we have so many absent, inept, or, sadly, dead parents. The child, thereby, is left alone and is forced to act on her own behalf—to become a protagonist. The protagonist acts, and out of that action plot arises: things happen.

Here’s an example of a protagonist who protags. Laurie Halse Anderson’s MG novel Chains is about a girl named Isabel who is a slave in revolutionary era New York. Slavery would not seem to permit protagging—a slave is supposed to be obedient, and not act out on her own. The cool thing about Isabel as a character is that she insists on protagging despite her situation. Other people seek to control her destiny, but they cannot—only she can. So when Isabel is branded on the face with the letter I for Insolence, she refuses to be labeled. I stands for Isabel, she insists, for herself.

Later, a kind woman says to Isabel that she should have bought Isabel to save her from a cruel master. Now Isabel could have reacted by being grateful for a kind gesture, but she isn’t. Isabel protests, I am not a thing to be bought and sold. Even as a slave, she is her own agent. In the end, she makes the decision to protag herself right out of slavery—and into a new life.

Here are some other great main characters who protag:

Laura Ingalls (not a good girl, like her sister Mary)

Claudia and Jamie from The Mixed up Files of Mrs Basil E. Frankweiler (these are not nice children)

Alec (stranded on an island: tames a wild black stallion!)

Charlotte (spins webs to save her friend’s life)

Who are some of your favorite, memorable characters in children’s literature? In what ways are they protagonists who protag?

Now look at your own work. In what ways are your characters protagonists? In what ways do they act in the world?

Note from Kate: Feel free to share your reflections – on both favorite protagonists and on those in your own work – in today’s comments!

Important resources for everyone - but especially teachers & librarians (thanks to @TraceyBaptiste for the link) https://t.co/glQn4qgm1R
View on Twitter
5
8

Just wrapped up a presentation for Eastern Kentucky University Summer institute & we talked about the importance of curiosity & empathy in fighting racism & other kinds of bigotry. Here are some resources I shared, for attendees & others who are interested. @EmilyZuccaro (thread)
View on Twitter
3
26