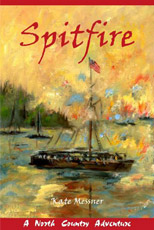 October, 1776… Twelve-year-old Abigail Smith disguises herself as a boy, steals a leaky rowboat, and sets out to join the American fleet on Lake Champlain. She’ll risk her life to find her uncle — her only living relative and her only hope for a real home. Young Pascal De Angelis is on board an American ship, awaiting battle with the British when Abigail joins the crew. She introduces herself as Adam Smith and establishes herself as a worker and a loyal friend. Neither Abigail nor Pascal realizes just how close they are to one of the bloodiest battles the Champlain Valley will ever see. And neither can predict how those three days in October will change their lives forever.

“With a clear, memorable storyteller’s voice, Kate Messner shares a tale from a part of America’s history that should be better known. I recommend this book, not just to young readers, but to anyone with a love of history and a thirst for adventure.”

“…an informative, exciting story about a significant military encounter during the American Revolution.”