The trick to writing a series of historical adventures with a time-traveling search and rescue dog is choosing topics that kids are excited to read about. Often, that means dealing with time periods that have been written about many times before but digging to find a story that hasn’t been told over and over. 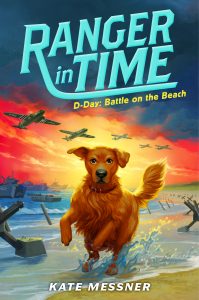 The latest book in the Ranger in Time series, D-DAY: BATTLE ON THE BEACH, is set during World War II, at the Battle of Normandy. When I started reading and researching to find my way into this book, I discovered a story that I’d never heard before, even though I’d seen plenty of movies like Saving Private Ryan and The Longest Day.

It was the story of the 320th Barrage Balloon Battalion, the only African American combat unit to come ashore on D-Day. These men were among the first ashore on Omaha Beach. Their mission was to raise car-sized balloons over the beach to keep German bombers from flying low enough to hit their targets. Those balloons helped to protect Allied troops as they came ashore after their overnight crossing of the English Channel, buying them time to make their way up the beach. One of my main characters in this new Ranger in Time book, Walt Burrell, is based on the men of the 320th. In order to tell his story, I needed to read the stories of the real men who served in that unit.

I read this article in the New York Times, which tells the story of how William Dabney, a member of the 320th who fought on Omaha Beach was finally able to return there to be honored in a ceremony. It was a far cry from the way Dabney and his fellow soldiers were ignored and discriminated against when they finished serving their country and came home to Jim Crow America. 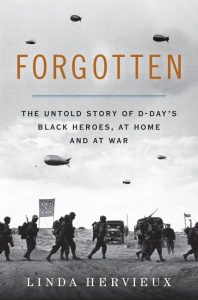 I devoured Linda Hervieux’s book FORGOTTEN: THE UNTOLD STORY OF D-DAY’S BLACK HEROES AT HOME AND AT WAR. This work of nonfiction is written for adults, but selected excerpts would be great to share with students who are reading Ranger’s latest adventure in class.

When I talk with students about research, I always share with them how my work begins at the library, with paper books. Next, I read all that I can find about my topic online, and then comes my favorite part of the research process — field trips. I spent a week in France when I was working on RANGER IN TIME: D-DAY: BATTLE ON THE BEACH. I spent time at the incredible Shoah Memorial in Paris, which shares in painful detail the story of how Nazis and the French police who helped them rounded up Jewish people and sent them away to concentration camps. One of my characters is a boy named Leo, whose grandmother sent him away to live with a farmer in Normandy, hoping it would be safer than Paris. His story is based on the stories of so many children I read about at this memorial. 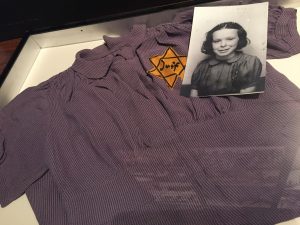 I spent a day at the incredible Caen Memorial Museum, which tells the story of World War II, starting with the early days when the Nazis turned neighbor against neighbor by targeting Jewish people for discrimination. The museum has artifacts, narratives, and documents about nearly every aspect of the war in France.

I also toured Omaha Beach, where Leo and Walt meet one another. This was where the Allied forces came ashore on June 6, 1944 to begin the battle that ultimately freed France from the Nazis. Standing beside the bunkers where German gunners waited for the Allied forces is an experience I’ll never forget. 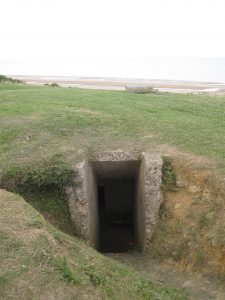 I’m truly grateful to Claire LeSourde, who served as our expert guide as we walked through the landscapes where the battle took place. Here’s where the men of the 320th were most likely to have come ashore, she’d explain. Here’s where their balloons would have flown. See this hill behind the German pillbox? That’s what they would have climbed on their way to liberate the village of Saint-Laurent-sur-Mer. 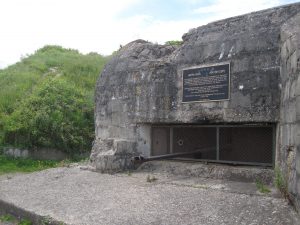 Claire had offered to connect me with a man whose family lived in that village — the setting for the opening scene of D-Day: Battle on the Beach — at the time of the invasion.  Unfortunately, he was in the  hospital on the day we visited. But Claire asked around at the local farm stand and found a woman who said her mother-in-law might be open to talking about her experience. We waited, sipping cider samples while it was arranged, and then we were invited into a nearby farmhouse to meet Jeannette Legallois.

She’s quite shy, Jeannette’s daughter-in-law told us. She may not have much to say. But Jeannette invited my family to sit down at her kitchen table and proceeded to talk with us for well over an hour, with Claire translating. 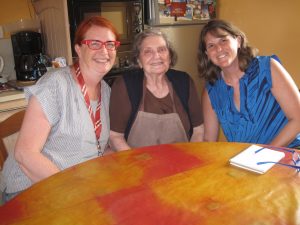 Jeannette was fifteen years old when the Allies arrived to liberate her village. She remembered how excited everyone was, how the children chased the jeeps and the women brought cider out for the soldiers. But she remembered sadness, too. So many of her neighbors had been killed and hurt in the Allied bombing raids that came before D-Day. They couldn’t believe that it was finally over.

Jeannette told us stories of living in occupied France, too. She remembered how the Nazi soldiers arrived at her farm, demanding five liters of milk each day. Her brothers would stick their fingers in the milk “to put germs in it” before they delivered it. Food was rationed then, and Jeannette would sneak meat in her school bag to give to classmates whose families didn’t have as much. She remembers how her father listened to the BBC on his secret crystal radio in the basement. That was forbidden, so she’d wait outside, pretending to play in the garden but really keeping watch for German soldiers so she could warn him to hide it if they came near. Parts of Leo’s story in D-Day: Battle on the Beach are based on Jeannette’s real-life experiences in 1944.

My trip to Normandy wouldn’t have been complete without paying tribute to some of the real heroes of the 320th who gave their lives on Omaha Beach. We found the graves of Henry J. Harris, Brooks Stith, and James McLean at the American cemetery. 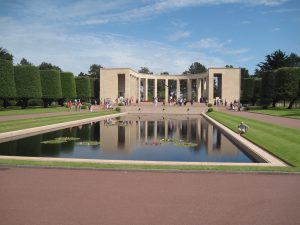 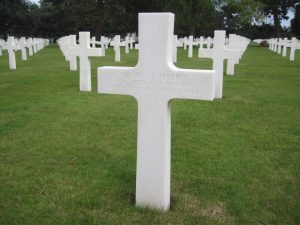 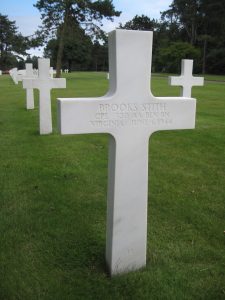 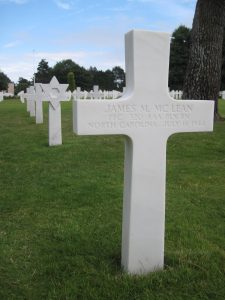 When I returned home from this trip, I was overwhelmed with stories in the best possible way. I brainstormed and transcribed notes and looked over photographs and brainstormed some more. Many months later, I’m so exited to share this story with you. I hope you’ll share it with the young readers in your life who love dogs, history, and adventure. 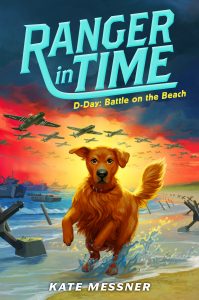 Ranger in Time: D-Day: Battle on the Beach is out today! It’s available wherever you like to buy books. If you have a wonderful local independent bookstore, I bet you love them just as much as I love mine, and I hope you’ll buy it there.

2 Replies on “Researching Ranger in Time: D-Day: Battle on the Beach”

An important read - and not just for educators. https://t.co/Y7S98DmvDl
View on Twitter
0
2

Words matter. And I appreciate this piece from @Poynter Institute on active vs passive voice. This is also important to think about when we're writing about history & talking about people who "were enslaved" instead of saying who actively enslaved them. https://t.co/iK22kRiC7j
View on Twitter
12
48

A SONG BELOW WATER by @BCMorrow is out today - it's a powerful, gorgeously written YA novel about Black girl magic & voices, and it could not be more timely. You need this one. https://t.co/wODFaGK8MX
View on Twitter
6
14

Grateful to @JasonReynolds83, @KielyBrendan, & @AuthorVillage for tonight's conversation on racism, All American Boys, and most importantly, what we do now.
View on Twitter
2
177