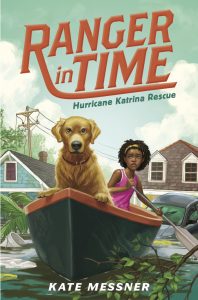 Ranger, the time-traveling golden retriever with search-and-rescue training, arrives in New Orleans as Hurricane Katrina approaches and residents start to evacuate the city. Ranger meets Clare Porter, who is searching for her grandmother. Once Ranger helps Clare find Nana, he takes shelter with them at their home in the Lower Ninth Ward, and they wait for Clare’s father to return from the gas station. But there’s no sign of him as hours pass and the weather gets worse. The wind picks up and rain pours down. And when the levees break, floodwaters dangerously rise, and Clare and Nana are separated. Can Ranger help Clare navigate the flooded streets to safety and back to her family?

This is book eight in my Scholastic chapter book series about a time-traveling search and rescue dog, and its more recent setting made it one of the toughest to research and write. The first seven books in the series are set in the more distant past…

Most kids who enjoy the Ranger in Time series weren’t born yet when Hurricane Katrina happened in 2005, so this story is also “history” to these readers. But for those who lived through the storm and its aftermath in New Orleans, the memories are still raw. When I was researching this book, I spent my usual weeks in library, reading everything from first-person accounts to news reports and government documents. I watched hours of video, including Spike Lee’s powerful documentary When the Levees Broke. I spent time doing research in New Orleans, too. 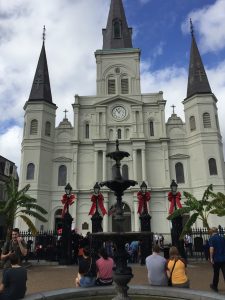 It was December of 2016 when I visited, and the tourist areas of New Orleans were sparkling with holiday decorations. But parts of the Ninth Ward were another story. Some streets looked as if the hurricane might have happened in the past year or two, rather than more than a decade ago. And many people who live here still feel just as forgotten as they did when they were waiting for help in the days after the storm. Laura Paul with the relief and rebuilding organization lowernine.org drove me though the neighborhoods that were hardest hit in 2005. She pointed out the homes that her organization helped rebuild and the areas where the neighborhood seems to be coming back. 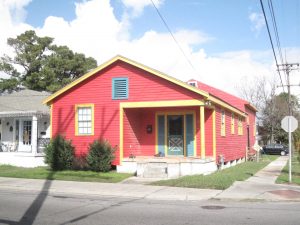 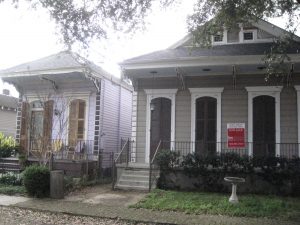 But there are still blocks where most every home is ruined. Porch steps that lead to nowhere. Streets littered with debris from work crews. Uncovered storm drains that don’t seem to get fixed, no matter how many calls people make to the city. And there is still so much frustration and anger. A sense of betrayal over how the people of this neighborhood were treated when they needed help. 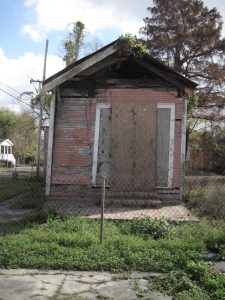 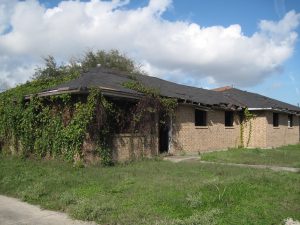 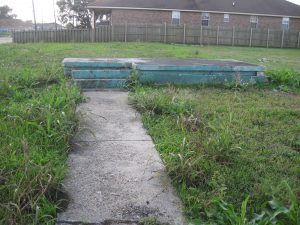 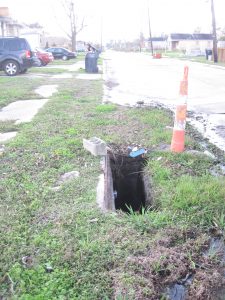 There’s a wonderful little museum in this neighborhood called the Lower Ninth Ward Living Museum, and it chronicles the history of the neighborhood, from its role in the Civil Rights Movement through the devastating aftermath of Katrina. Photos tell the story of the storm and the days that followed. 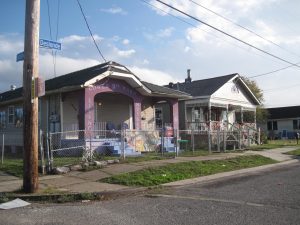 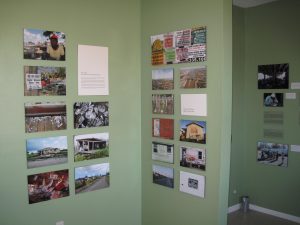 One of the things I appreciated about this museum is that it pointed out examples of racist media coverage of the aftermath of the storm. Below is a pair of headlines about people taking supplies from grocery stores, described as either “looting” or “finding,” depending on the survivor’s skin color. 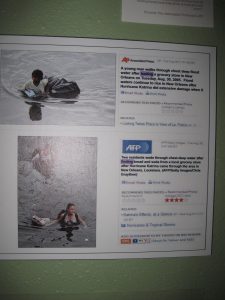 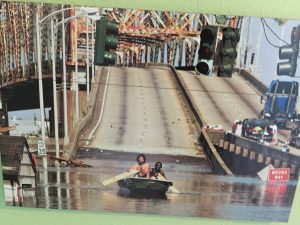 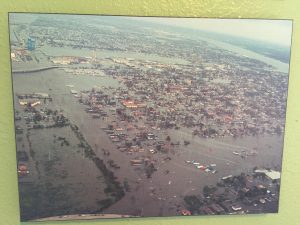 J.F. “Smitty” Smith, a resident of the Lower Ninth Ward, talked with me about his experiences in 2005 and read an early draft of this Ranger in Time manuscript. When we talked on the phone, he was incredibly helpful and pointed out some details about the storm and recovery. But mostly, he wanted to talk more about the lack of help in 2005, and how awful it was, waiting. Reading the manuscript had brought it back for him, and he was frustrated all over again. “You don’t understand,” Smitty told me. “That dog has got to get in there and SAVE more people.”

That conversation, more than any of the other research I’d done, helped me to understand how residents of the Lower Ninth Ward felt after Katrina. And it led me to revise the manuscript, again. I’m so grateful to Smitty for making time to talk with me.

There are still many residents of the Lower Ninth Ward who need help rebuilding homes that have been in their families for generations. I’ll be celebrating book release day by making a donation to lowernine.org. Will you join me? 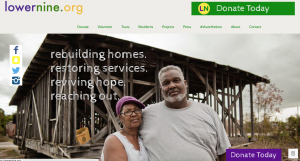 If you donate $20 or more, I’ll enter you in a drawing for a 30-minute Ranger in Time Skype visit in the fall (date to be agreed upon in September). You can use it for your classroom, library, or book club – or give it away to a school you want to support. To enter the drawing, just make your donation, and then leave a comment below.

And of course, if you’d like to read RANGER IN TIME: HURRICANE KATRINA RESCUE, it’s available from your favorite bookseller today!

1 Reply on “Ranger in Time: Hurricane Katrina Rescue is out today!” 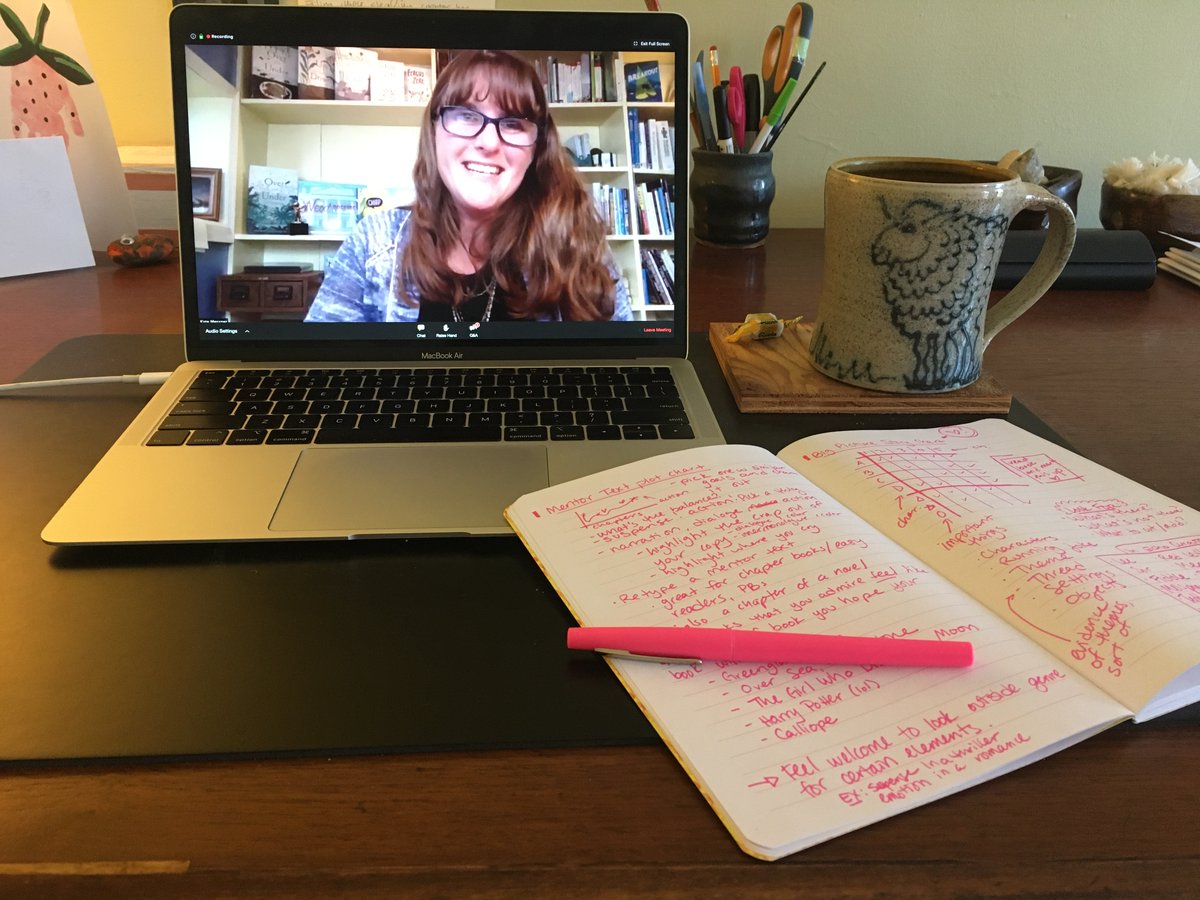 Louise Feder @louisefeder
Thank you so much, @KateMessner for today's @scbwi webinar! My tea went cold from taking so many notes! 😊 https://t.co/PEmDSwmjGD
6
248

I had so much fun leading this afternoon's novel revision workshop for @scbwi - HUGE thanks to all who organized this and to all 3000 of you who joined me for some work on our manuscripts today! ❤️❤️❤️ https://t.co/QEUM1yxP5u
View on Twitter 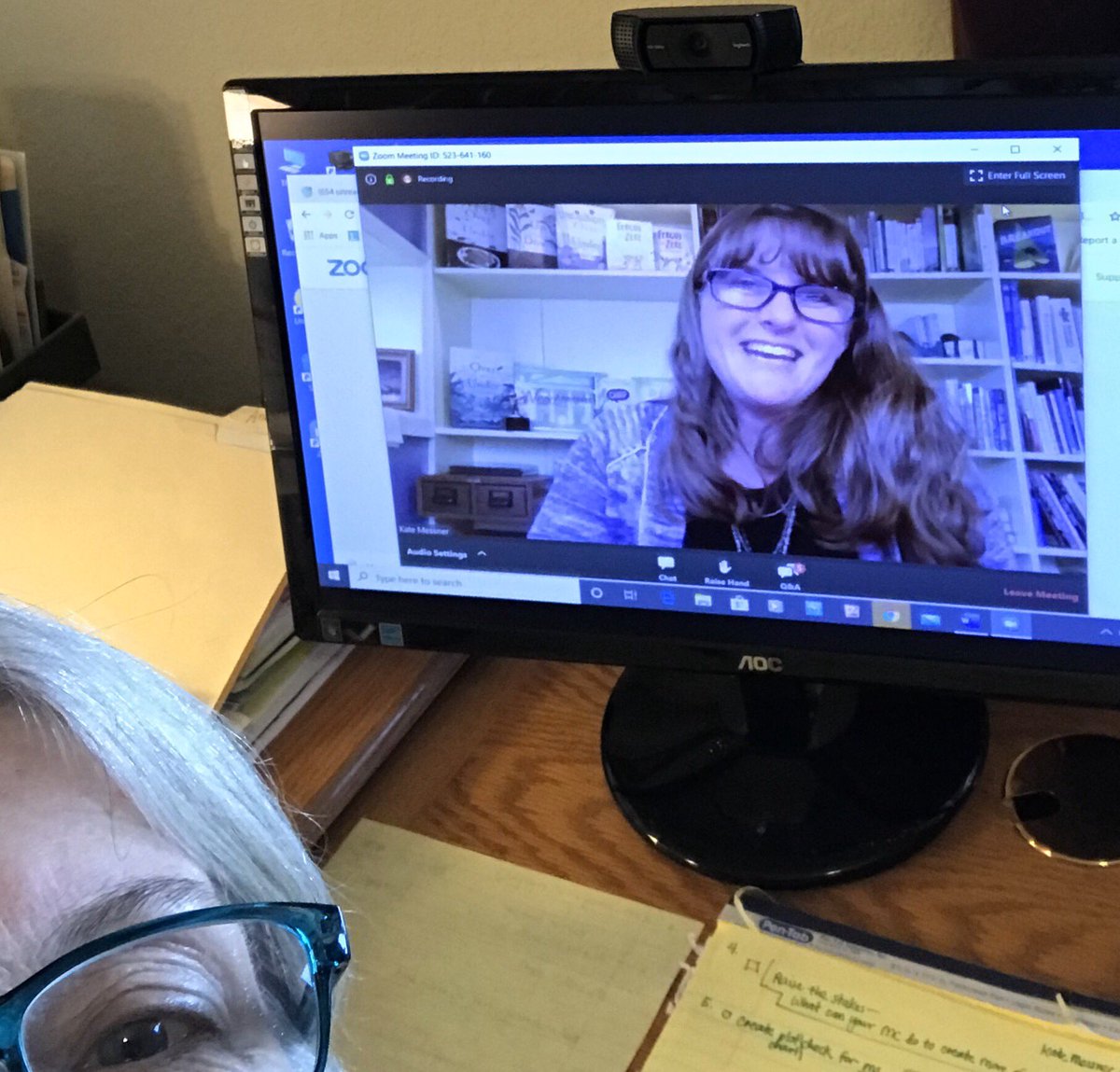 This is a fantastic resource for everyone who wants to support indie booksellers at this time! (And I hope that's all of us!) Thanks, @ElissaSussman! https://t.co/KWktT7fMrF
View on Twitter
13
20

Just turned in the manuscript for a new Fergus & Zeke book! To celebrate, I'm sharing a read-aloud of the first book in this easy reader series with @Candlewick - FERGUS AND ZEKE. Enjoy! (Illustrations by @hrosstweets!) https://t.co/mTzWvRJaUS
View on Twitter
3
8

Hey, friends... If you're in the habit of ordering books from the big online giant, now is a GREAT time to form a new habit and make friends with your local indie bookstore. Here's why... (thread)
View on Twitter
255
822
Latest Posts