2015 will be my busiest book year ever, with seven new titles coming out!

I know…that’s a serious pile of books for just one year, but sometimes, things just work out that way. My new Ranger in Time series with Scholastic is on a two-books-a-year schedule, and two picture books that I wrote years ago are illustrated now and ready to meet the world. Add to that my 2015 novel, a new book for teachers and writers, and a calendar full of travel, and it’s going to be a pretty exciting year.

First on the calendar is RANGER IN TIME: RESCUE ON THE OREGON TRAIL, which releases January 6th in both hardcover and paperback, from Scholastic. This is the first in my new chapter book series, about a time-traveling search and rescue dog. His first mission is to help a family traveling west on the Oregon Trail in 1850. 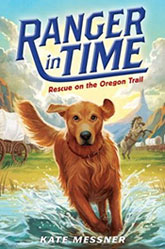 School Library Journal featured Ranger in its Early Chapter Books to Cheer About feature: “This excellent story contains historical details, full-age illustrations, and enough action to keep even reluctant readers engaged. A wonderful author’s note at the end is full of quotes from authentic journals, factual information on search-and-rescue dogs, and suggestions for further reading. This is a stellar choice for readers just starting full-length chapter books and would be a hit with young history buffs and dog lovers as well.” 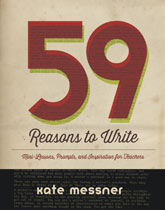 On January 13th, 59 REASONS TO WRITE comes out from Stenhouse. Officially, this is a book of mini-lessons, writing prompts, and inspiration for teacher-writers. But really…it’s for anyone who has always wanted to make more of a commitment to writing. You can preview this title here.

On January 27th, my new middle grade novel, ALL THE ANSWERS, comes out from Bloomsbury. It’s about an anxious 7th grader named Ava who finds a magic pencil that answers any question she asks. Almost. Booklist liked it —  “Although Ava is constantly worried, the novel’s tone remains bright and cheerful. Yes, there’s a magical pencil, but this remains an emotionally resonant portrait of a sweet girl whose struggles are firmly rooted in reality.” — and I hope you will, too. 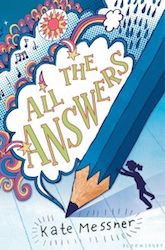 I’ll be on tour for ALL THE ANSWERS from January 26th-February 6th – visiting schools and bookstores in Detroit, Chicago, Indianapolis, Minneapolis, Boston, Vermont, and Northern NY.  If you can’t make it to an event but would like to order personalized, signed copies of RANGER IN TIME or ALL THE ANSWERS, you can call The Bookstore Plus at 518-523-2950. I’ll be signing there on February 4th and will sign all pre-orders then.

In May, HOW TO READ A STORY comes out from Chronicle Books. It’s a playful celebration of the fine art of sharing a story aloud. This book has been a long time coming (I sold it back in 2011!), and I am so excited about how it turned out. Mark Siegel is responsible for the charming illustrations. 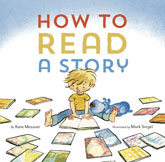 If you loved OVER AND UNDER THE SNOW, you’ll be happy to know that illustrator Christopher Silas Neal and I have a follow-up title coming in March. 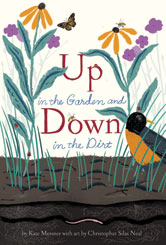 UP IN THE GARDEN AND DOWN IN THE DIRT explores daily life in a vegetable garden, spending time with a grandmother and child weeding and watering as well as the earthworms and beetles working away down in the dirt, doing their own part to keep the garden growing.

The second Ranger in Time book launches this spring, too. 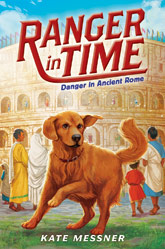 RANGER IN TIME: DANGER IN ANCIENT ROME will be out June 30th. Also a simultaneous hardcover/paperback release, this book sends Ranger back to the days of gladiator fights at the Roman Colosseum.

I plan to spend my entire summer sitting beside Lake Champlain with a cool drink in my hand, recovering from all of these book releases. (Not really. I’ll also be writing and hopefully traveling to research a new project.)

Then, in the fall, TREE OF WONDER comes out from Chronicle. I don’t have a final cover yet, but here’ s a peek at the incredible art… 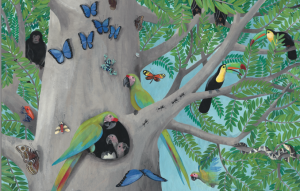 This picture book, illustrated by Simona Mulazzani, celebrates biodiversity and math as it explores the multiplication of life in a single rainforest tree.

I’ll be visiting a number of schools, libraries, bookstores, and festivals throughout the year. You can find my appearance schedule here, and if you’re near one of the cities I’ll be visiting, I do hope you’ll come say hi and introduce yourself.