We’re celebrating Women’s History month with 31 days of posts focused on improving the climate for social and gender equality in the children’s and teens’ literature community. Join in the conversation on Facebook https://www.facebook.com/kidlitwomen or Twitter #kidlitwomen

I have never met an educator or children’s book creator who didn’t claim to support diversity in children’s literature. Surely, all of our kids deserve to see themselves in the stories we share. And most of us are rightly troubled when we look at statistics like these: 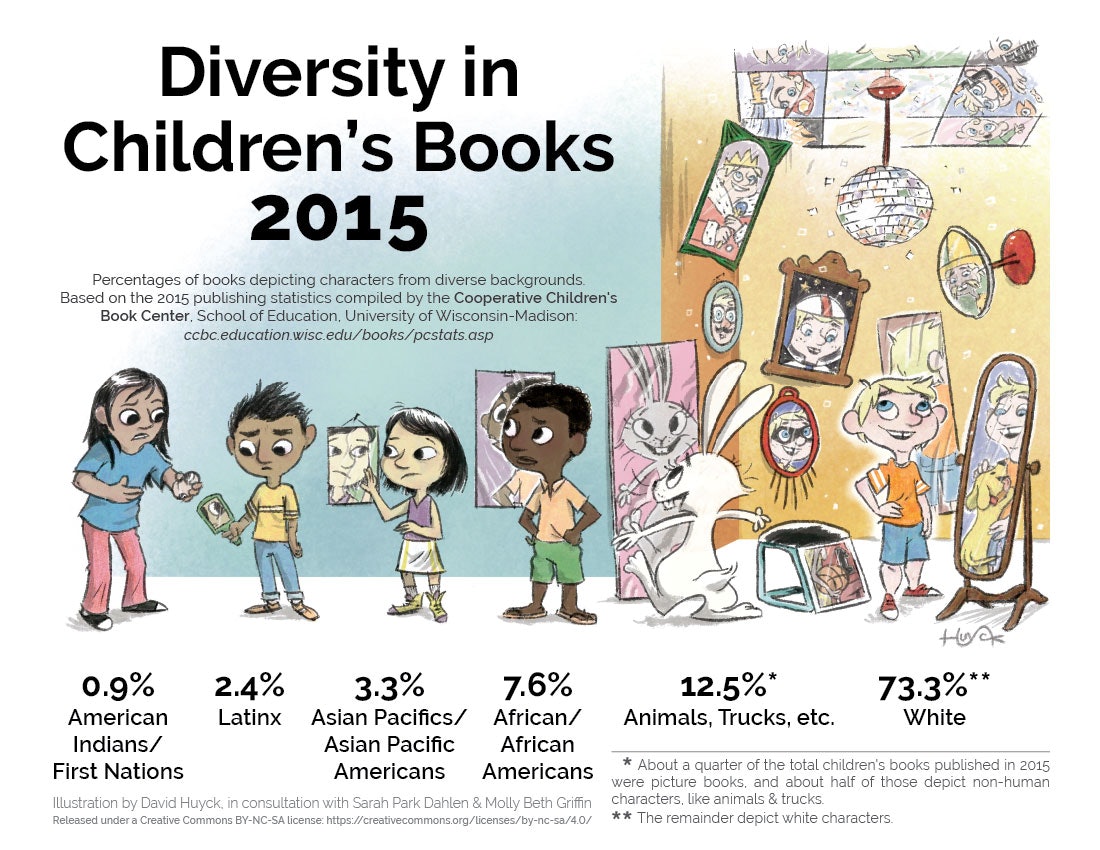 And yet…  Somehow, year after year, we see conference keynote lists and book festival lineups and conference panels that are made up entirely or almost entirely of men and/or white people, which only serves to reinforce the inequities. We see conference panels that promote “FIVE FUNNY MEN!” and “ADVENTURE BOOKS FOR BOYS,” all by white male authors. When girls and people of color see these lineups over and over again, it sends a persistent and insidious message.

This business of telling stories and making art is not for you.

Librarian Edi Campbell notes that when indigenous people and people of color are invited to speak, they’re often relegated to diversity panels. “Associations think that having panels on topics of social justice, equity, or diversity makes them look more inclusive. Rather, having these panels with IPOC, LGBT+ individuals or people with disabilities without including them on topics that address literary, scholarly, or professional topics perpetuates the colonization of youth literature,” Campbell says. “Have we ever seen Ellen Oh, Jacqueline Woodson, or Meg Medina afforded the honor (!) of speaking solely on their craft?” Campbell also notes that not enough work is done to make panels accessible. “People with disabilities are often excluded even from panels centered on marginalized people and adding insult to injury, they often are not afforded a way to access the information presented.”

Conference organizers should also think about the issues involved with inviting only one person of color to participate in an otherwise all-white panel. Tracey Baptiste, author of The Jumbies and Rise of the Jumbies, says that can be exhausting. “I have often been the only POC on a panel,” she says. “It’s uncomfortable, especially when someone says something insensitive or low-key racist, like ‘It’s easy to add diversity to your books, just change some of the kids’ names!’ Which is a real thing that was said when I was on a panel of me, and three white men. I’m put in the position of having to teach or correct publicly, or smile and deal with the insult of comments like that, and it’s mentally and emotionally exhausting.”

Most often, an unbalanced panel like this doesn’t happen because organizers are carefully planning to leave out women and people of color. It happens because they’re not planning carefully enough. Creating a great panel or festival lineup or book display takes thought. It requires one to read widely and make a point to learn about new authors and illustrators from all different backgrounds. Often, it requires asking for help.

Author-Educator Colby Sharp often asks for input in creating a more diverse lineup of speakers for NerdCamp MI. “I ask publishers to consider sending a diverse groups of creators to camp,” he says. “They are almost always willing to do this.”

I’ve found this to be the case in recent years, too, and have had great luck when I’ve approached publishers to request an author or illustrator for a panel. But sometimes, this can be tricky territory for educators to navigate. As a conference or panel organizer, you’re often asking publishers to sponsor an author or illustrator’s travel to your event. What happens when you’re trying to create a diverse group and you request a particular author, but the publisher offers up another white male author instead? It’s okay to say no thanks. In this situation, I usually say something like, “I so appreciate this offer. Author A was at the top of our wish-list for this event, but we’re planning to reach out to a few other people if you’re not able to send her. Thanks for considering – and I’ll circle back to you if it turns out that we have another opening for Author B.”

Sarah Mulhern Gross, a teacher & writer who also works on conference lineups says, “When dealing with publishers we are very clear about our focus on the authors/illustrators being representative of our student population. Sometimes we have to say it twice (and often in writing), but so far, so good.”

She brings up a great point. If we’re presenting content related to children’s books, shouldn’t we aim for a lineup of featured authors and illustrators that represents our kids?  Census data shows us that America is growing more diverse, and by 2020, half of the nation’s children will be non-white.  Just over half of our population is female, too. What does that mean for our conference lineups and panels?  If you’re committed to fairness and real representation, it means that you should aim for any group you put together to be at least half women and at least half people of color. And it’s important to think about other kinds of inclusion, too, relating to gender, orientation, religious & cultural backgrounds, and disability.

So here’s the challenge. Can we agree that we’d like to live in a world where all kids get to see themselves in books and see creators who look like them? If so, here’s what we can all do to move a step in that direction.

A CHALLENGE FOR EDUCATORS, CONFERENCE AND FESTIVAL ORGANIZERS, AND PANEL MODERATORS

I reached out to author-educator Donalyn Miller, whose conference panels are among my favorites because they always feature diverse voices and views. She offered four tips for conference, book festival, and panel organizers:

A CHALLENGE FOR AUTHORS AND ILLUSTRATORS

There are many dynamics at work, creating and sustaining the inequities we see in the world of children’s books. But there are also some things we can easily address. If no one moderates or participates in all-male/all-white panels, we’ll stop seeing them, and we’ll begin to see more festival and conference lineups that better reflect the amazing kids for whom we make books.

Give it some thought, okay? Later this month, Mike Jung will be coordinating a pledge for men of children’s literature who are committed to no longer participating in all-male panels or conference/festival lineups. And Laurel Snyder will be coordinating a pledge for those who promise not to participate in events & panels unless they include people of color. It’s important to note that this isn’t the only kind of diversity we need in children’s literature, and we have a long way to go to make sure that all of our kids are represented. But maybe this can be a start. I think it’s a conversation worth continuing.

Important resources for everyone - but especially teachers & librarians (thanks to @TraceyBaptiste for the link) https://t.co/glQn4qgm1R
View on Twitter
5
7

Just wrapped up a presentation for Eastern Kentucky University Summer institute & we talked about the importance of curiosity & empathy in fighting racism & other kinds of bigotry. Here are some resources I shared, for attendees & others who are interested. @EmilyZuccaro (thread)
View on Twitter
3
24