My next middle grade novel, THE SEVENTH WISH, comes out June 7th! I’ll be on tour much of June, sharing stories, visiting with readers and signing books. I hope you’ll come say hello if one of these stops is near you, but if not, you can still order a signed copy through my local indie bookstore…

TO ORDER PERSONALIZED, SIGNED COPIES OF THE SEVENTH WISH:

Let them know how you’d like the book signed & they’ll ship it out to you after I sign it on June 9th!

Here’s where you’ll be able to find me in person this June & July. All bookstore events are open the public. You can click on the links to RSVP to the event on Facebook & invite friends who might be interested, too. 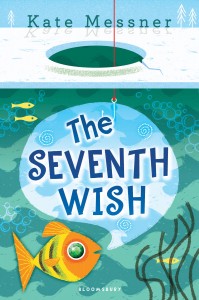 Here’s a little more about THE SEVENTH WISH…

Twelve-year-old Charlie—a devoted friend, loving sister, enthusiastic Irish dancer, and budding ice fisher—has read enough stories to know not to be greedy when making wishes, so she is extra careful when a wish-granting fish turns up at the end of her ice-fishing pole. She isn’t always careful, however, to be specific with the wording of her wishes, leading to muddles for her friends and family in this rich and daring novel. What initially seems harmless becomes seriously hurtful when well-meaning Charlie is unable to wish away a loved one’s struggle with addiction, and the book takes a hard but important turn from the ordinary fun of middle-school crushes, sibling rivalry, Irish dancing, and fish-wishing into drug abuse and its aftermath. As she did in All the Answers, Messner lightens a heavy theme with a bit of magic (this time the talking fish rather than a talking pencil) while humanizing a growing epidemic and helping readers understand that even “good people make awful mistakes.”

In this novel-length riff on “The Fisherman and His Wife,” when Charlie goes ice fishing with pal Drew and his nana, she catches a fish who says it will grant her wishes in return for its release.

Charlie would like some control over her life, so she keeps hooking the fish even as she learns, like her fairy-tale predecessors, that wording matters. After all, Charlie’s hope that Roberto Sullivan notice her goes unfulfilled. Instead, a boy named Robert O’Sullivan shows up! Her generous intentions toward friends and family meet with varying success as well. Drew makes the basketball team, except he doesn’t like sports; and good friend Dasha passes her ESL class only to find keeping up in regular classes difficult. Charlie narrates, making dry, honest observations that zing straight to the hearts of readers, especially as the story builds toward one of Charlie’s most anxious pleas: that her beloved college-student sister be cured of her heroin addiction. But wishing doesn’t make it so. Charlie’s largely white upstate New York world is fully realized, typical in its everyday concerns and complicated by a frightening, news-making epidemic. As Charlie processes the changes in her life, her perspective shifts. Friends of all ages, old and new, support her. And she finds outlets in ice fishing and Irish dance. Most affecting, Charlie begins to understand the serenity prayer. Hopeful, empathetic, and unusually enlightening.

In this realistic novel with a whimsical twist, 11-year-old Charlie catches a magical wishing fish and tries to use it to solve all her problems. Her wishes range from getting rid of her fear of the ice to getting her sister to come home from college for a visit. Not surprisingly, poor phrasing causes her wishes to go wrong, and she ends up making things worse instead of better. The plot covers a lot of ground, ranging from Charlie struggling to save enough money to buy a dress for her Irish dancing performance to helping one of her classmates learn English. The most serious subplot involves the discovery of her older sister’s heroin addiction and her subsequent treatment. Charlie eventually decides she does not need to rely on making wishes to solve her problems. Though somewhat sanitized, the gentle portrayal of heroin addiction may serve as a good way to introduce this serious issue and engender discussion. VERDICT A charming fantasy story with threads of several deep themes that could serve as the basis for thoughtful discussion.

Just wrapped up a presentation for Eastern Kentucky University Summer institute & we talked about the importance of curiosity & empathy in fighting racism & other kinds of bigotry. Here are some resources I shared, for attendees & others who are interested. @EmilyZuccaro (thread)
View on Twitter
3
22