My June and July were crowded with travel to cities whose views come atop buildings instead of peaks, but I finally made it out for the first big hike of the season this week. I was worried about having waited so long, but I shouldn’t have been. From the unmistakable smell of deep Adirondack woods to the scrape of rock on my palms as I climbed to the familiar burn in my legs on the descent…it was just so good to be back.

My hiking pal Marsha and I decided we’d climb Lower Wolfjaw and see how we were doing as far as time and energy, and make the call about continuing on to Upper Wolfjaw from there. We set out from the St. Huberts parking area at 7:22, and it wasn’t long before we reached the trailhead…along with a note about bears. 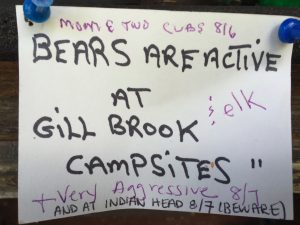 We decided to take the Wedge Book Trail, which heads into the woods after a short walk along the Lake Road. 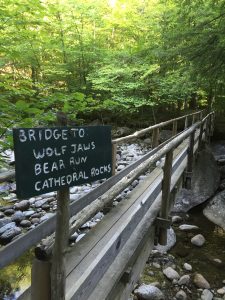 We’d read that this climb is a gentle one at first, and that proved to be true – the trail is beautifully maintained and soft, with more pine needles than rocks. After a while, it begins to follow the brook, which was lovely. There’s an especially pretty little waterfall near this bridge crossing. 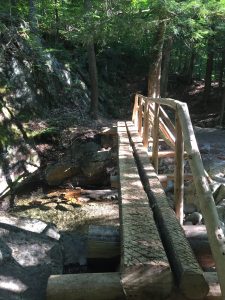 The last mile or so was steeper and rockier, but nothing particularly challenging by high peaks standards, even for someone a little out of practice. We reached the summit of Lower Wolfjaw at 10:10. It’s not an open summit, but there are some pretty views if you explore a bit and climb the rocks. 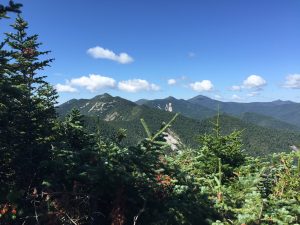 We decided to continue on to Upper Wolfjaw, since it was only 1.5 miles away. This was a fun spot…a tight squeeze that required us to take off our packs and shimmy through the rocks, climbing sideways. 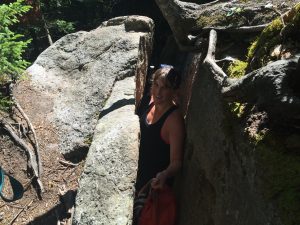 (Hikers who don’t fit through here could bypass the crevice by climbing over a rock face instead. It’s steep but doable.)

We’d read about a false summit on Upper WJ, so we weren’t surprised when the trail continued on past this big boulder that seemed summit-like… 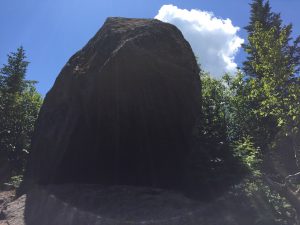 We were, however, a bit confused when the trail kept descending – a lot. Then it leveled off and started climbing again. It wasn’t until we got to the top of Upper Wolfjaw at 11:45 that we figured out why. In order to get from Lower to Upper, you have to climb a smaller mountain in between. You can see that in the photo below – that’s Lower on the left and the smaller hill on the right. My hiking buddy called it the “fake mountain” since it didn’t count for our 46. 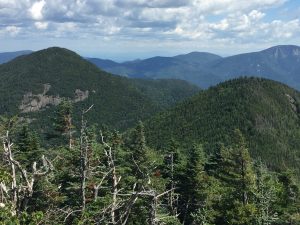 The summit rock at Upper Wolfjaw is on the small side, but there was plenty of space to sit down for lunch and enjoy the views. 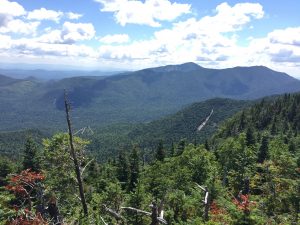 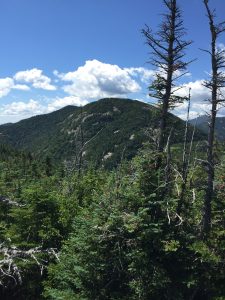 That’s Armstrong in the photo above, a mountain that some people climb along with the Wolfjaws. We were running low on both time and water, though, so we left Armstrong for another day and headed down. The path between Upper and Lower has some steeper sections that involve scrambling on the way up. We chose the tried and true Adirondack butt-sliding strategy to get down a couple of them. 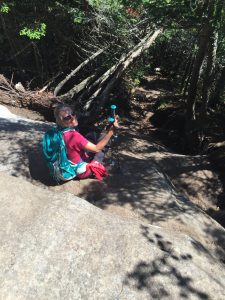 I learn something on every hike, and if I had this one to do over again, I’d bring more water. I’d brought two liters and knew there were opportunities to filter along Wedge Brook Trail on the way down, but it was a hot day, and we were both out of water and thirsty about a mile before we reached the brook. Lesson learned. I’ll bring another liter next time I do a hike of this length. But the hike down was still enjoyable. We stopped to admire some cool fungi. 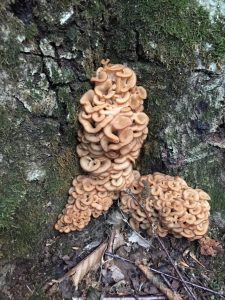 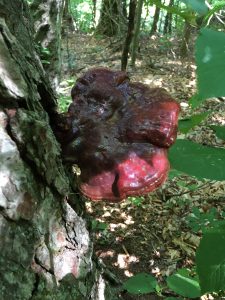 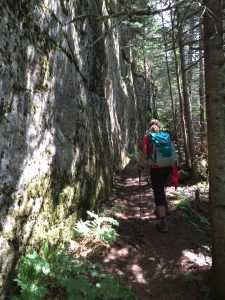 I had to take a photo of the AMR gate on the way out…so pretty with the afternoon sun in the trees. 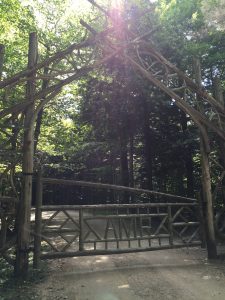 It was fun to see Giant Mountain from the road back to the car and be able to say, “We’ve been up there!” It was one of my favorite hikes of last fall. 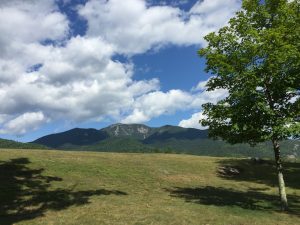 Our Wolfjaws hike ended up being about 12.5 miles and took just over 8 hours – not a bad start to the 2016 climbing season. My legs were feeling it the next day, but I feel like I have my high peaks confidence back now and am ready to get back out there. The mountains are already calling again.

* Grace (in the greeting) is Grace Hudowalski, the first woman to climb all 46 high peaks. She was a founding member of the Adirondack 46ers, the group’s 1st president, and later on, its secretary and historian, roles she filled until she died in 2004. It used to be that if you wanted to be a 46er, you had to log each climb by writing a letter to Grace. And Grace would write back. She answered thousands and thousands of letters, with encouraging words and sometimes, her own reflections on a climb, too.  Today, the 46er application process is simplified; one only needs to keep simple climb records on a club form that can be downloaded. But I wish I’d had the chance to climb these mountains and write letters about them when Grace was around to read them. I love her story and her strength and the way she urged others to get outside and explore and tell their stories. So I’ve decided to write the letters anyway. I think Grace would have liked that.