Good morning!July has flown by, hasn’t it? Are you ready for one more week of writing together? Here’s your Monday Morning Warm-Up with Jo Knowles.

And our guest author for Mini-Lesson Monday is Elizabeth Dahl, who lives in Baltimore. She’s the author of GENIE WISHES (Amulet/ABRAMS 2013), a middle-grade novel with line drawings. Elizabeth joins us today to talk about the power of sketching in the writing process…

Drawing Your Way to “The End”

About ten years ago, my father gave me a long, narrow pewter paperweight on which was engraved a simple question: “What would you attempt to do if you knew you could not fail?” I didn’t have to think twice about my answer: Write a book. Be a writer.

Because I loved books and words, I’d studied English and writing in college and grad school. Every time I’d hear or read an interview with a writer, I’d think, “Those are the ways that my mind works too.” But by my mid-thirties, after years of working as a copyeditor, proofreader, and writer for publishers, corporations, associations, and government agencies, my only finished pieces of creative writing were scattered short stories, poems, and essays, and I’d barely even tried to get them published.

This was the big unmet goal of my life. And an unmet goal has its own heft, no less perceptible than the heft of a paperweight. Over the years, my unmet goal had grown from a stone to a boulder. It was craggy and mossy and impossible to move.

Then one day when my son was in fourth grade, I started writing a story about a fifth-grade girl who was elected to be her class blogger. After the end of the first paragraph, I grabbed pen and paper and drew something I’d mentioned within that paragraph. A minute later, I scanned the drawing and inserted it into the file. 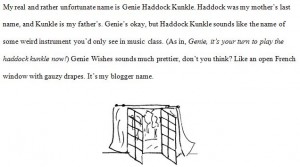 Almost immediately, I felt lighter and happier. And so I kept going, chapter by chapter. If I found myself writing about hamster erasers that sat atop pencils, I’d think, Why not draw one? 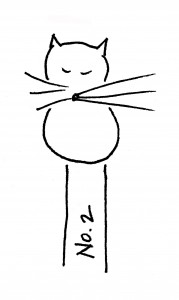 After I’d finished a first draft (I had a first draft!), I went back to chapter 1 and, while revising the story, considered more places I might add line drawings. That weird musical instrument Genie was imagining, born out of her middle and last names, for instance: What did it look like? 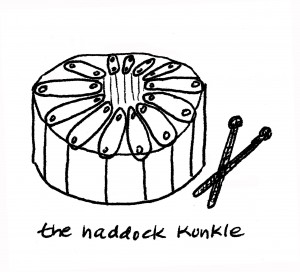 I’d never been the strongest student in my various art classes, but who cared? The drawings were another expression of my main character’s voice, as important as the first-person narration that carried the bulk of the story and the intermittent blog posts that punctuated each chapter.

The more I thought about it, the creative boost I was getting from these drawings made sense. I’d always loved illustrated books as a kid—especially books with simple line drawings, like Antoine de Saint-Exupéry’s The Little Prince. As an adult, I continued to love them—books like Tom Angleberger’s Origami Yoda series and Grace Lin’s Dumpling Days. Similarly, I loved the scattered line drawings that appeared within columns of The New Yorker. They were modest, charming, and sometimes a bit sly. They added personality.

Eventually, I signed with an agent, Marissa Walsh, who sold Genie Wishes to the Amulet imprint of ABRAMS. I was thrilled. Not only did my ABRAMS editor, Maggie Lehrman, like what the drawings did for the story, she asked for more. In the end, I had a book that was 40,000 words and 50 drawings long.

I have to be honest. Without those drawings, I’m not sure there would ever have been a book at all. The drawings provided levity, and the levity worked as a propulsive force. It was the forklift that budged the boulder.

The larger lesson here isn’t that everyone should illustrate their own writing. But it’s good to remember that other forms of creative expression can inform and enhance the writing process.

Some novelists listen to the same grouping of songs as they write a particular novel. Others have cork boards full of images that inspired their characters or settings. There’s no limit to the ways that other art forms can complement your literary efforts. Whatever helps you get to “The End.”

Today’s assignment: Take a few minutes to draw or doodle today! It doesn’t have to be anything that you believe will end up in your story, but sometimes, drawing can wiggle ideas loose, so give it a go. Maybe you’ll try one of Elizabeth’s strategies above, or maybe you’d like to storyboard one of your scenes. (Jo Knowles has a great post on that here.) Stop by to reflect on your experience in the comments if you’d like!

Important resources for everyone - but especially teachers & librarians (thanks to @TraceyBaptiste for the link) https://t.co/glQn4qgm1R
View on Twitter
4
7

Just wrapped up a presentation for Eastern Kentucky University Summer institute & we talked about the importance of curiosity & empathy in fighting racism & other kinds of bigotry. Here are some resources I shared, for attendees & others who are interested. @EmilyZuccaro (thread)
View on Twitter
3
22