It’s Sunday, which means reflection day at Teachers Write and a time to check in with one another on Jen’s blog. It’s also time for a Teachers Write giveaway and another one of our Focus on Historical Fiction posts. Let’s talk history first!

My Ranger in Time series is written in third person, and goes back and forth from Ranger’s dog-centered point of view to the point of view of the main character in the historical setting. Choosing the right words is always important in writing, but in historical fiction, the author has a responsibility to select not just a word that sounds good but also one that fits the point of view and makes sense in that particular time period.

When I’m writing descriptions from Ranger’s point of view, for example, I need to remember that dogs don’t see most colors but do have a highly sophisticated sense of smell. How would a dog from the 21st century describe a 19th century covered wagon or an amphitheater in ancient Rome when there was nothing quite like those things in his world? Perhaps he’d make a connection to the cars that his home family used for travel or the soccer stadium where his boy played. What frame of reference might that dog have for the smell of oxen and lions when we don’t encounter these animals regularly in our modern-day lives? I needed to remember that Ranger would have had the experiences of his modern-day family and probably would have seen animals like other dogs, cats, squirrels, birds, and horses, but probably nothing much more exotic. You can take a look at page 17 in RANGER IN TIME: RESCUE ON THE OREGON TRAIL and pages 16 and 24-25  in RANGER IN TIME: DANGER IN ANCIENT ROME to get a sense for how I chose to handle this. If you’re sharing this prompt with students, it might be fun to have them bring Ranger back in time to whatever period in history you’re studying at the time. How would a dog from our world describe the smells, sights, and sounds of Revolutionary War battle or a ship full of immigrants bound for the New World?

Language is also important when we think about the historical setting of a story and what was and wasn’t around at that time. Obviously, my pioneer kids in Rescue on the Oregon Trail won’t have iPhones or iPads. That would be an anachronism – something that appears in a time period in which it just doesn’t belong. But this can be easier for a proofreader to spot with technology than with words. The first printing of my regional historical novel Spitfire, set in 1776, had a character using the word “okay,” which didn’t enter the lexicon until the middle of the 19th century. This slipped by proofreaders and was pointed out to me by a kind reader so that we could correct it for the second printing. I’ve been even more careful with words since then.

In RANGER IN TIME: RESCUE ON THE OREGON TRAIL, one of the sections written in Sam’s point of view talks about how he’s glad that Ranger has come along:

“It was good to have furry company, especially with Lizzie being so cranky.”

When I got my manuscript back from my Scholastic editor with notes, I found a comment asking if “cranky” was really the best word. She’d checked – and it was part of the lexicon in 1850, but she thought it might sound more current and wondered if something else might be a better choice. Would I give that some thought and see what I could come up with?

I understood that while technically, the use of “cranky” was all right, it might sound modern to some people. So I brainstormed some other words I might choose instead and thought that “grumpy” sounded right and a bit less modern, too. But was it a word that would have been part of Sam’s world in 1850? Some quick internet research told me that it was not and also led me to this delightful Wordnik blog post about different ways to call a grouch a grouch, no matter what the time period.

According to “A short-tempered history of the curmudgeon,” cranky was indeed a word in 1850, but “grouchy” didn’t come around until the 1890s. According to the blog post, the Online Etymology Dictionary says college students at the time may have coined the word, possibly as a derivative of the Middle English grucchen, which meant to grumble or complain.

Sourpuss was also out of the question on the Oregon Trail, since it didn’t show up in our language until 1937. And while the word “grump” was around in the 1700s, meaning “ill-humor,” it was generally used as part of the phrase “humps and grunts,” which I love…but it isn’t relevant here. “Grump” apparently wasn’t used to describe a grouchy person until around 1900.

Curmudgeon and crab were both options, but curmudgeon sounded too old for Sam’s point of view, and crab felt too oceany to me for a story that traveled over land. (I know – that’s a weird reason to reject a word, but it’s my book, so I get to decide these things, whether they are rational or not.)

So ultimately, an hour later, I changed the word back to cranky.

This is why revising a book takes so long.  🙂

On to our giveaway now!

Last week, I was at the wonderful International Reading Association Conference in St. Louis and brought you all back some presents!

Okay…the truth is, I couldn’t bring back books for ALL of you because of airplane carry-on limits. But I brought back a couple of really special signed books so we could have a giveaway. Here they are… 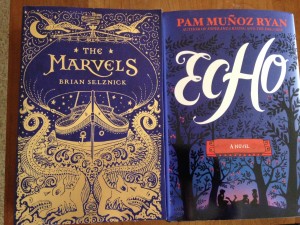 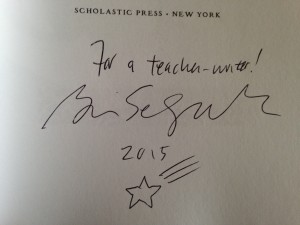 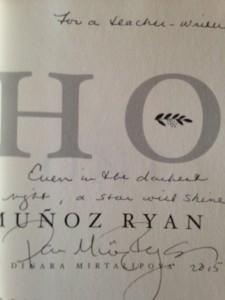 If you’d like to enter the giveaway, you’ll need to do a little word-research work based on today’s historical fiction blog post. Choose a word that you’d like to know a little more about – maybe one from your work-in-progress, or maybe not – and look up its etymology online. (One quick way to do this is to simply google the word and “etymology.”) Where did the word come from, and how long has it been part of the English language? Come back here to share what you learned in a comment before Thursday at 9pm EST, and you’ll be entered in the drawing! I’ll pick a winner and send the books out Friday morning.

Just wrapped up a presentation for Eastern Kentucky University Summer institute & we talked about the importance of curiosity & empathy in fighting racism & other kinds of bigotry. Here are some resources I shared, for attendees & others who are interested. @EmilyZuccaro (thread)
View on Twitter
3
21