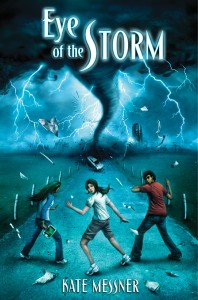 What’s the most extreme weather event you’ve ever experienced?  What was it like?

What do you already know about tornadoes?  How are they different from regular thunderstorms?

What do you think the world will be like in the year 2050?  What will the climate and weather be like? What kinds of technology might we have?

How would you feel if you were Jaden, going to spend the summer with your dad in Oklahoma?

Do you think you’d like to live in Placid Meadows?  Why or why not?

Why do you think Jaden’s mother chose a book of poetry to remind her of home?

When the storm approaches in Chapter 4, why do you think Jaden and Risha react to it so differently from one another?

Would you want to attend camp at Eye on Tomorrow?  Which area of study would you choose?

Jaden worries about whether she belongs at such an elite camp, whether she’ll fit in. Based on what you’ve learned about her, how do you think she’ll do there?

Do you think Jaden and Alex like one another? Why do you think Alex was hesitant to make friends with Jaden at first?

Do you trust Jaden’s father? How do you think she feels about him as she gets to know him more?

Jaden thinks about the poem “Geometry” while she’s working on her meteorology project with Alex. How do you think the poem relates to their research?

How does Ms. Walpole fit into the Eye on Tomorrow staff? How do you think she’s different from Van and Jaden’s dad?

Why don’t you think Jaden tells Alex about the data she sees during the drone’s flight right away? What would you have done in her situation?

Why do you think Jaden decides to risk sneaking into her father’s office when he goes to bed?  Do you think she had a right to be snooping?

How are Jaden’s thoughts about her father changing as she learns new information?  Is your opinion of him changing, too?

In Chapter 17, Alex asks Jaden to take a huge risk to help their research, and when she says she can’t, he tells her, “Then you’re not the person I thought you were.”  Is this fair? Or was he asking too much of her?

Why do you think Jaden is so drawn to Great-Aunt Linda?  Do you have a relative other than your immediate family to whom you feel especially close?

Why do you think Jaden changes her mind about doing what Alex asked her to do?  How is she changed by her experience with Risha in the barn?

What do you think Jaden is thinking as she leaves her father’s office at StormSafe? How would you interpret everything she learned?  If you were Jaden, what would you do next?

Why do you think Great-Aunt Linda decides to tell Jaden the truth about Grandma Athena?  How does it change the way Jaden looks at her father?

What role do you think Van has been playing in StormSafe’s attempt to buy the land for Phase Two of Placid Meadows?

Does Alex have a right to be angry with Tomas?

Based on Jaden’s decisions in these chapters, how do you think she has changed since the beginning of the book?

Why do you think Jaden leaves Alex to go to StormSafe? Do you think her logic makes sense?

How do you think Jaden feels when she realizes who’s working in the outbuilding?  Looking back, were there any clues she should have picked up on?

How does the quote from Joseph Stalin relate to Grandma Athena?  How does it relate to Jaden later on?

How do Alex, Jaden, and Risha handle the crisis with the tornado while they’re in the StormSafe office?  How do each of their personalities and strengths affect how they react to the situation?

Is it ever justifiable to test a scientific theory on real people without running a simulation first?

Should the government have been more involved in regulating weather manipulation in this book?  What about real-life research issues in current events?  Should the government fund research that relates to fields like medicine, climate, and technology?  Or should private companies pay for that research and be allowed to profit from it if it is successful?

What do you think happened to Grandma Athena?

If you were Mirielle, what would you do now that you’ve learned the truth?

Why do you think Jaden is so intent on working with the National Storm Center’s new research project?

If you were put in charge of creating a science camp for kids to work on solving our society’s biggest science-related problems, what problems would you choose to work on?

Imagine that you are the director of a camp like Eye on Tomorrow. Write an introduction speech like the one Dr. Meggs gives to the campers at orientation, explaining the problems that campers may choose to study and why they are important.

If you were Jaden, what else might you say in the letter you write to your father at the end of the book?

Write the rest of Jaden’s letter to her father at the end of the book,

Write a letter from Jaden to Grandma Athena.

4 Replies on “Eye of the Storm Discussion & Teaching Guide” 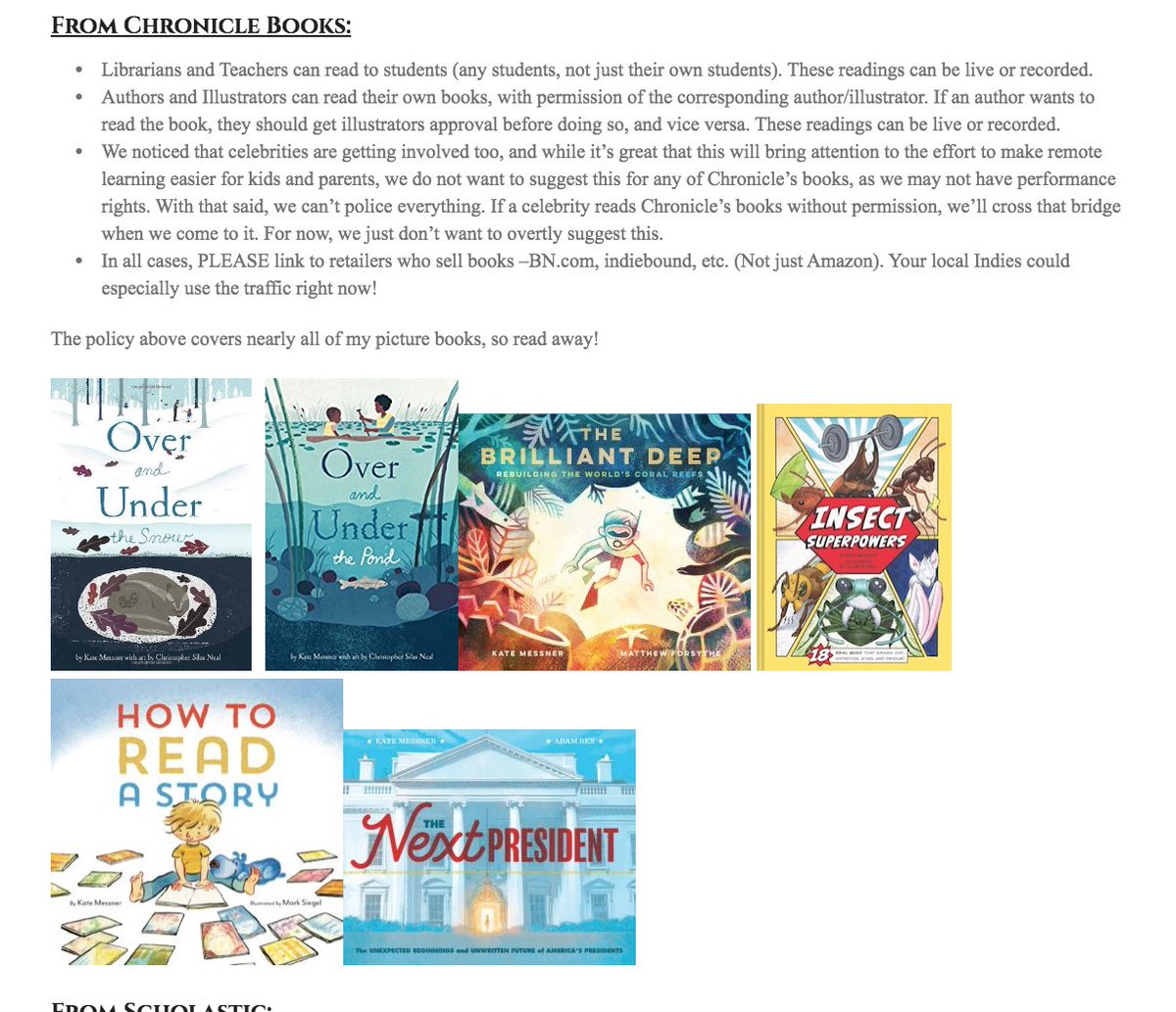 katemessner @KateMessner
Teachers,librarians, & authors - Here's a page with all the read-aloud permissions & fair use statements publishers have shared so far. https://t.co/UEqjRue3BH
If you know of others, please share & I'll update. Thanks for all your work to keep our kids reading & learning! ❤️ https://t.co/CiwYS9aNwj
34
110 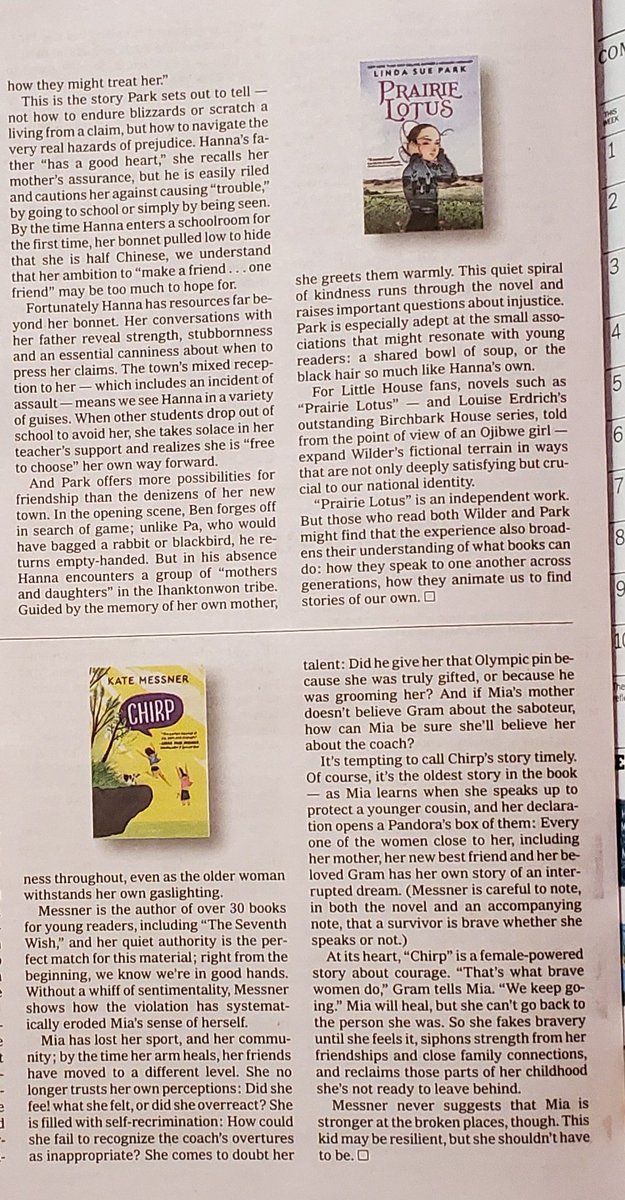 Linda Sue Park @LindaSuePark
The NYTimes review of #PRAIRIELOTUS by @nalinijones is in today's print edition AND--delightful surprise--on the same page as Laura Tucker's review of CHIRP by @KateMessner! 😍😍😍 https://t.co/iof4D9to7J
2
41

While I'm sad for my daughter that her freshman year of college was cut short, it sure is lovely to have her home playing show tunes on the piano right now. Listening to "What I Did for Love" while I make dinner. ❤️
View on Twitter
1
327

This is unconscionable. And making this move in the middle of a pandemic seems to be a clear attempt to steal land while people are otherwise occupied. We all need to speak up. https://t.co/XBG4alCYWo
View on Twitter
204
255

My 87 year old dad has been riding around his FL neighborhood on his bike, shouting "SIX FEET!" at people who are still talking in groups too close together, and I think maybe he should run for governor. #CoronaSheriff #SocialDistancing #StaySafeStayHome
View on Twitter
58
1660

It's not every day one of my books gets reviewed in the @nytimes - or that any review at all understands & appreciates a novel the way this one does. One of the small things I'm celebrating today, even in the midst of everything. https://t.co/g36OplEMCP
View on Twitter
50
406
Latest Posts